To those of us who were born late enough and lucky enough to have never lived without indoor temperature control, the prospect of this reality is pretty daunting – especially in heat waves like the one we’re in now.

So this begs the question: how did people survive the seemingly unsurvivable? How did they beat the heat before it was as easy as adjusting a thermostat? Was there any escape or just endless suffering until autumn?

As it turns out, our ancestors weren’t nearly as hot or hopeless as we may think. Here are just a few ways folks managed to stay (somewhat) cool before the miracle of modern air conditioning…

Even the most ancient of human beings managed to find a cool place indoors, or, more accurately, in caves. In order to escape the brutal sun on hot days, early humans would find caves and underground caverns with surprisingly cool temperatures – hence the term ‘caveman’.

The deeper and more cavernous these caves were, the cooler they would remain. And while this method may seem primitive, it is anything but obsolete. There may not be many caves on the real estate market these days, but basements in modern homes still mimic them to produce the same natural cooling effect.

Basements aren’t the only way old homes were designed to combat heat before AC. In fact, there were a variety of features used by builders and homeowners to ensure the coolest indoor temperatures possible.

Post-cave and pre-AC, most homes were built with thick walls made from heavy stone, mortar and brick for more effective insulation from the elements. These well-built exteriors allowed less heat to enter homes and buildings.

Given that heat rises, many homes were also built with high, cavernous ceilings, lending the cave effect to above-ground rooms and providing ample space for the hot air to escape to.

Homes with multiple stories used open staircases for the same reason, allowing heat to rise upstairs while keeping the main level cooler. Some homes even had ventilation towers built in to allow the heat to keep rising up and out.

Beyond curb appeal, porches on old houses used to serve a crucial technical purpose when it came to keeping cool. Before AC, when temperatures soared both outside and indoors, people would flock to their porches for a bit of shade and a cool breeze.

Porches also provided shade from the sun’s piercing rays for homeowners and homes alike. While awnings help to cool down the area on the porch itself, the added coverage surrounding structures meant a less direct route for heat from sunlight to enter.

Homes also took advantage of wind and shade in other ways, such as strategically planted trees and windows with overhangs (for shade) placed on opposing sides of rooms (for added airflow).

In addition to all the ways listed above, there were a few more creative (and slightly weirder) methods used to stay cool in the before times. For example, hanging wet laundry in doorways and windows was apparently helpful for keeping the heat at bay.

Earlier inventions like ice boxes were also sometimes used to refrigerate sheets and clothing prior to use, and some people even went so far as to freeze their underwear before sleeping in it. Whatever keeps you cool I guess!

Getting Used To It

It is also important to keep in mind that comfort, like all things, is relative. Living in a time before AC almost certainly sounds worse than it really was because folks back then didn’t know any better. Having never experienced the miracle of AC, they were unaware of what they were missing and, therefore, didn’t miss it.

So what’s the number one way people survived the heat before they had AC? They got used to it. They accepted it, and they lived with it (or rather without it).

While none of the methods listed above sound ideal when compared to the modern luxury of cool, conditioned airflow at the push of a button, it is good to know that our ancestors, while slightly sweatier, were cooler than we might assume.

5 Signs You Should Upgrade Your HVAC 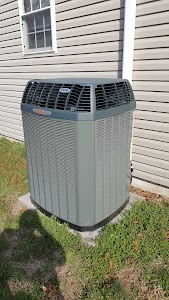